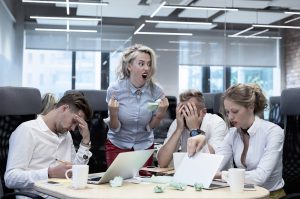 Study after study concludes that American workers are more stressed, sleep deprived, burnt out, and disengaged than ever before. And clearly this results in a lack of performance, creativity, and commitment. So, it’s no wonder that only 13 percent of employees worldwide feel engaged in their occupation. And much of this can be attributed to poor treatment.

So why is incivility so prominent in the work place and why should we propagate environments like that? Why do we find ourselves abused and even bullied by our managers and peers, who by the way, should promote loyalty and trust? The way we treat others, and the way we are treated, have significant consequences.

I would assume, just like you, that being treated poorly in the workplace impacts our willingness to contribute to the bottom line.

A leadership researcher named Christine Porath conducted a study about behaviors in the work place and found that people in negative professional situations were less motivated; 66 percent cut back work efforts, 80 percent lost time worrying about what happened, and 12 percent left their jobs. Furthermore, after the study was released Cisco contacted Porath and her research team and estimated, conservatively, that disrespect and rudeness was costing them 12 million dollars a year.

Unfortunately, these type of behaviors are almost contagious. Treating others, either kindly or rudely, becomes a learned behavior, so based on our surroundings, we might end up acting just as poorly as the colleague that is terrorizing us. It affects our emotions, our motivation, and our performance.

So, if the prevalence of bad-mannered people has such a huge cost to business, why do we still see so much of it? Well, there are several reasons why people are pushed to the limit—stress, the feeling of being overwhelmed, the worry that if they are nice then they will appear less powerful. It’s the old adage, do nice guys finish last?

But I think that we all believe that in the long run the bad guy doesn’t always win. Insensitive and abrasive leaders don’t steer the ship, they sink it. And eventually, leaders like this will have a mutiny on their hands, no one will have their backs, and sooner or later they will sabotage their own success.

But what about the nice guys? Does civility payout? Yes, it does. And being civil doesn’t just mean that you’re not the bad guy. Not holding someone down isn’t the same as lifting them up. Being truly civil means doing the small things—like smiling and saying hello in the hallway, listening fully when someone’s speaking to you.

So how can you change the tide? Well, you can choose to help your staff rise up. You can decide to build a corporate culture where no man is left behind. This doesn’t require a revolution, it’s more of evolution. And you can start now. But where do you start? Thank your team, share credit, build personal relationships, ask questions, welcome creativity, input and new ideas, and recognize and appreciate that your colleagues have an abundance of potential.

Be a respected leader or colleague—one that builds confidence in people by making them feel valued, appreciated, and heard. Don’t be one of those “bad bosses” and minimalize your colleagues by making them feel small, insulted, disregarded, or excluded. Trust me, whatever path you chose, it will mean everything.

Be mindful, because you can do better, to make your staff better. So, in every interaction, think: who do I want to be?