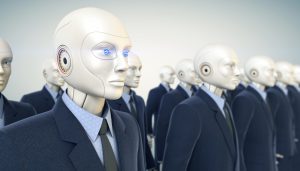 The New York Times recently published a story, “The long-term jobs killer is not China. It’s automation.” Following that, The Associated Press wrote a piece titled, “Why robots, not trade, are behind so many factory job losses.”

Are the news media and business experts painting a picture for the future of U.S. jobs?

Many of us believe that technology only affects entry-level jobs, but that’s not the case. Technology is powerful enough to kill manufacturing jobs, as well as eliminate many “white-collar” jobs (such as accounting and financial services) that involve repetitive and singular tasks.

Research released by Gallup indicates that, coming soon, a collision between technology and “business as usual” will occur, and it will be monumental, especially for millennials. The study notes that automation and AI are now the most disruptive forces driving business today and 37% of millennials are at high risk of having their jobs replaced.

And although millennials have long careers ahead of them, the rest of us aren’t going to be saved by the traditional human-based business model.

Ravin Jesuthasan and John Boudreau wrote a recent Harvard Business Review article based on the notion that AI will change the landscape of organizational structures.

The human work that is created or remains after automation will not fit easily into traditional jobs, nor will it always be optimally sourced through employment. Work will need to be freed from ‘jobs within organizations,’ and instead be measured and executed as more deconstructed units, engaged through many sources.

So do we resign ourselves and pretend that technology won’t get so smart as to take away our jobs? And are we really on a path to a jobless future? There must be another way.

The human is more important than the technology. Make things more human.

I believe in that statement and I think that is exactly where we start to take back what once was ours.

On July 17th, 2017, David Lee, an innovation leader at UPS, was featured on Ted.com. He makes an interesting and compelling assessment of what it will take for us—the career-minded working folks—to remain relevant in a world that’s becoming robotic.

He suggests that leaders stop in their tracks and think about asking people what problems inspire them to push for solutions, while considering the talent they bring with them to work everyday.

We know from experience, that when we bring people together with the challenge “to be more,” we are typically amazed about how much more they can be. In business, this idea sets the tone that jobs—human jobs—of the future may revive the promise that we can build great careers, working alongside technology. And what might have been a distant memory; there are ways that we can re-learn to show up on Monday morning, excited, because love our work.

There is great promise in the work of human innovation. Robots can’t set a strategic direction, they can’t pioneer an industry, they can’t breed talent, and they can’t develop a diverse work environment that strives for revolution.

The pressing issue here is that we need to learn to react to technological change in smart and appropriate ways. Meaning that there becomes an intersection of where automation is necessary but where human intervention is more thoughtful and compelling to cultivate successful businesses.

Mark Zuckerberg, Facebook co-founder, recently expressed his concerns about how automation will impact the economic and psychological aspects of the labor force for generations to come. However, at the root, he does believe in the need for people to thrive in business. He said,

“To keep our society moving forward, we have a generational challenge—to not only create new jobs, but create a renewed sense of purpose.”

Lee is energized by the idea that we can re-envision what it means to be part of a team. Empowered teams that dream up solutions—answers to questions that can’t be solved by automation. The fact is, machines can’t imagine and they can’t foster change, only people can.

This might be the next challenge of our lifetime. But we should all believe and work toward the goal that future jobs will come from people, not robots.