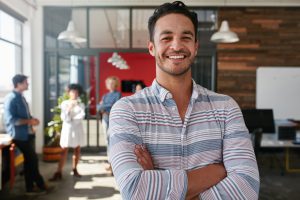 My Monday morning didn’t start off the way I hoped it would. This is how it goes in a nutshell. I get a call from my dear friend. He’s sitting on the freeway, knowing that he’s going to be in hideous L.A. traffic for nearly two hours, going to a new job that he’s very uneasy and unsure about. He was absolutely beside himself. I should clarify that, he was absolutely irate, out of his mind, at his choice to take a job that he didn’t really want—a job that I pretty much talked him into taking. I told him to slow his roll. I tried to be the voice of reason and talk him off the ledge, but he wasn’t listening.

In his moment of what I considered to be complete lunacy, he had some type of epiphany, or maybe he was still shaking off the cobwebs from “Sunday Funday.” But he turned around and drove back to Orange County. At that moment, he declared, I’m not doing this job. I’m not going to do any of this, anymore! I’m gonna start my own gig. So he came home and made the plans necessary to do just that. And already, he’s started his own consulting business and is on his way to his definition of personal greatness.

We’ve all come to a career crossroads like just like this—trying to determine what we “need” to do versus what we “want” to do. And you might find that the detour leads you to decide—I want to work for myself. I’m tired of the crap that the daily grind delivers, I’m sick of sitting in useless meetings with uninspiring people, I can’t stand listening to my boss talk just to hear himself talking.

I ask you this, what if you changed your point of view and looked at a bad situation as a means to better your life? What if you believed in yourself enough to take the leap to start your own company? I get that the idea of pursuing something unknown, a business proposition that doesn’t produce a bi-weekly paycheck, and the idea of being “alone” in a new venture, is frightening. But what if you took the a chance?

So what’s the motivation in staying in a career or a job that you don’t love? It’s security. But I’ll warn you, don’t spend the rest of your life living in a damn bubble. At the end of the day, all we have left is our memories, our experiences, and our hopes that we built a legacy. It’s you, and only you, that can chose to pursue your dream of creating a brand, a great company, from the top down.

So what 5 top competencies do you need to actually become a great entrepreneur?

You’re willing to take control of your own destiny. You have the power to break free from the constraints of someone else telling you what your mission in life is. I mean come on; this isn’t elementary school any more. If you’re fed up with your current situation, do something about it. And if you’re really passionate about an idea, then follow it whole-heartedly.

You believe that you can empower others. As Donald Trump once said,

“Watch, listen, and learn. You can’t know it all yourself. Anyone who thinks they do is destined for mediocrity.”

Initially, you might find yourself alone trying to figure out how and when to start your own business. But that’s when you seek out the best-of-the-best to help guide you, motivate you, and ultimately partner with you to build one hell of a great company. You become flexible and open-minded to allow others to help shape or reshape your destiny.

You have street smarts.

And enough knowledge to know that in many cases, college/universities and textbooks don’t necessarily lead you in the right direction. In fact, there are several well-known cases of exceptional, world-renowned entrepreneurs that dropped out of school. What you have learned and your life experience is what gives you the right to go out on your own. Intrinsically, you know where you are now, where you want to go, and how you’re going to get there.

You won’t, at any cost, give up. Steve Jobs said,

“I’m convinced that about half of what separates the successful entrepreneurs from the non-successful ones is pure perseverance.”

Winners don’t stop. They don’t wave the white flag. They figure out what it is that they love and then they build a business out of it. I might be making this sound too simple, but it’s true, and its necessary if you want to be a business owner.

I’ve said it before, and I’ll remind you again—if you don’t brand and market yourself, no one else will. You have to find your own voice. You have to define and communicate your value. One of the greatest myths about business success is that eventually your business, personal abilities, products or services will get discovered and be embraced by the masses that will beat a path to your door to buy what you are selling. But how can this happen if no one knows who you are, what product or service you sell, and why they should be buying? Creativity and self-promotion are two of the most beneficial, yet most underutilized, persuasive tools that business owners have at their immediate disposal.

Envision your drive as light. Let it physically manifest so powerfully that no one can look at you. You can do this. I believe in you.

So, I’ll leave you with a quote from the famous, inspirational Walt Disney.

“The way to get started is to quit talking and begin doing.”